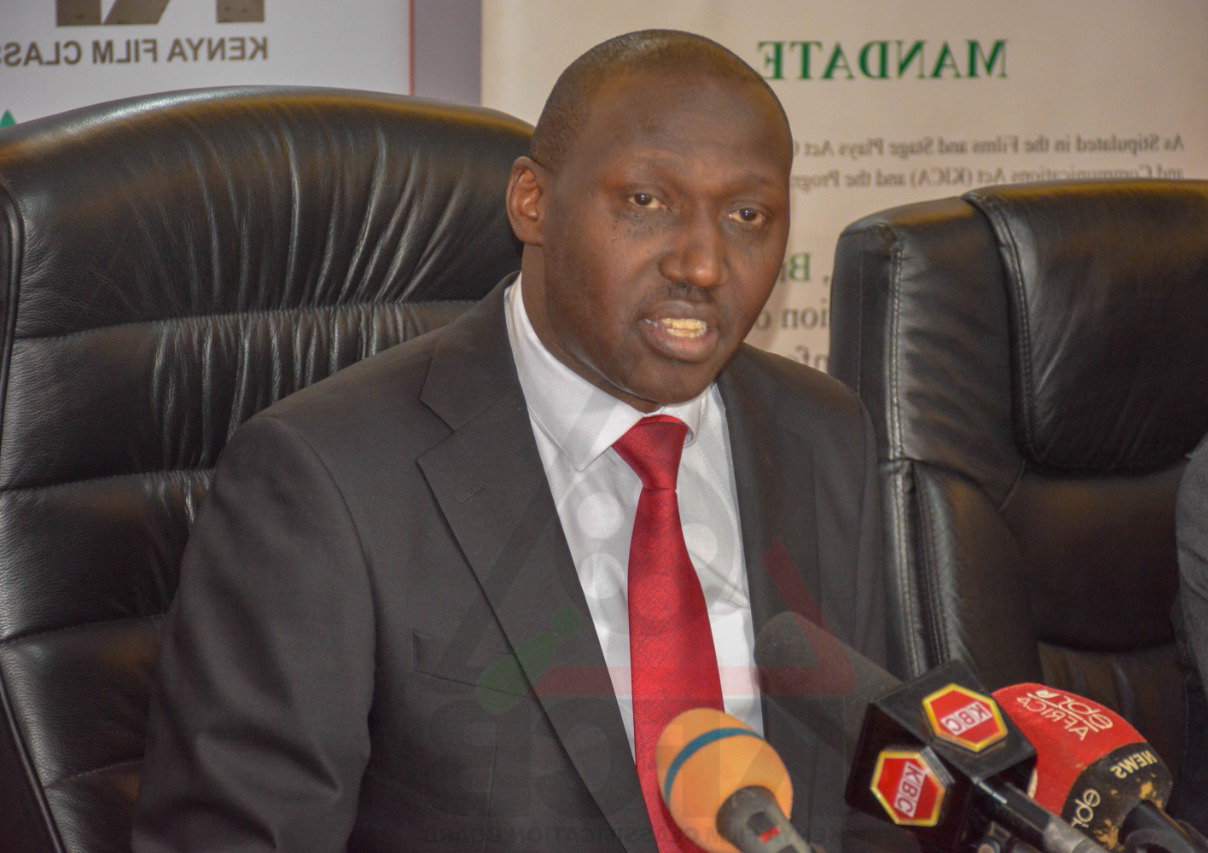 The Kenya Film Classification Board (KFCB) will effective 1st December 2022 start implementing the administrative decision on the redefinition of the role of film agents in Kenya.

The implementation follows the adoption of the administrative decision by industry players and stakeholders after an extensive public consultation process.

Addressing the Press today, 23rd November, 2022 at the Board’s Offices in Nairobi, KFCB Ag Chief Executive, Christopher Wambua, said that the redefinition of the role of film agents is meant to make it easier for young aspiring filmmakers to obtain licences directly from the Board instead of going through a film agent as is the practice currently.

He noted that this change would in effect, restrict the licence scope of the film agent to the provision of logistical support services to foreign film and television producers.

“In line with the requirements of the Constitution of Kenya (2010), KFCB subjected the proposal to public participation through various media platforms. Upon completion of the public participation and validation processes, stakeholders, including industry players, endorsed the Board’s proposal to confine the scope of the film agent licence to provision of international standard services to foreign film and television producers,” Wambua told journalists. 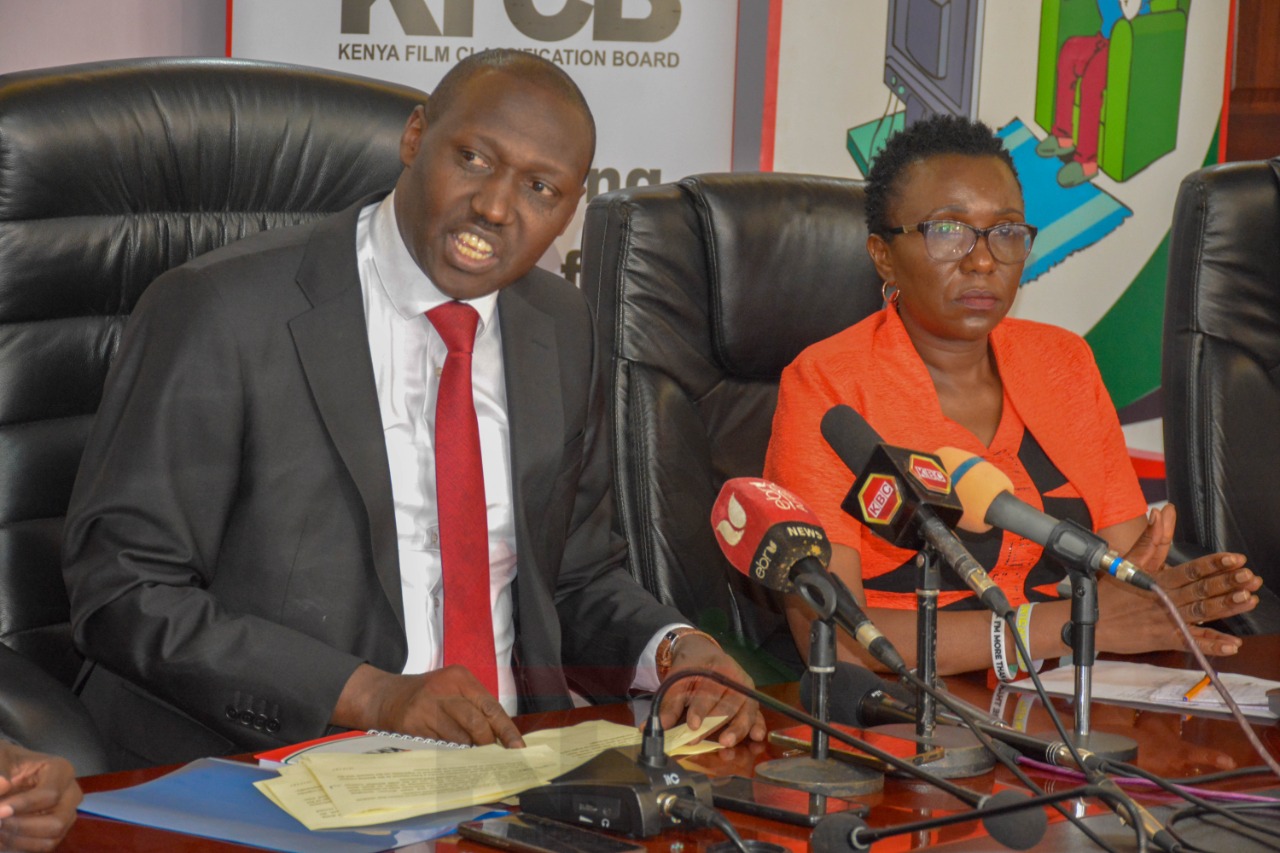 He said that the Board will on Friday 25th November, 2022 publish a Public Notice in the press to sensitize the industry on the validated administrative decision on redefining the role of Film Agents in Kenya and the Board’s intention to implement it.

He observed that the administrative decision is also aligned with the Kenya Kwanza Manifesto on the Creative Economy under the Commitment of working with stakeholders to identify the incentives, capacity building and other support required from the state to scale up cultural production and the creative economy.

“The removal of the requirement for local filmmakers to obtain filming licenses through a film agent has eliminated one of the key barriers to entry in the sector and thus incentivized young aspiring film makers to participate in the local creative economy through job creation and wealth generation,” the Ag CEO said. 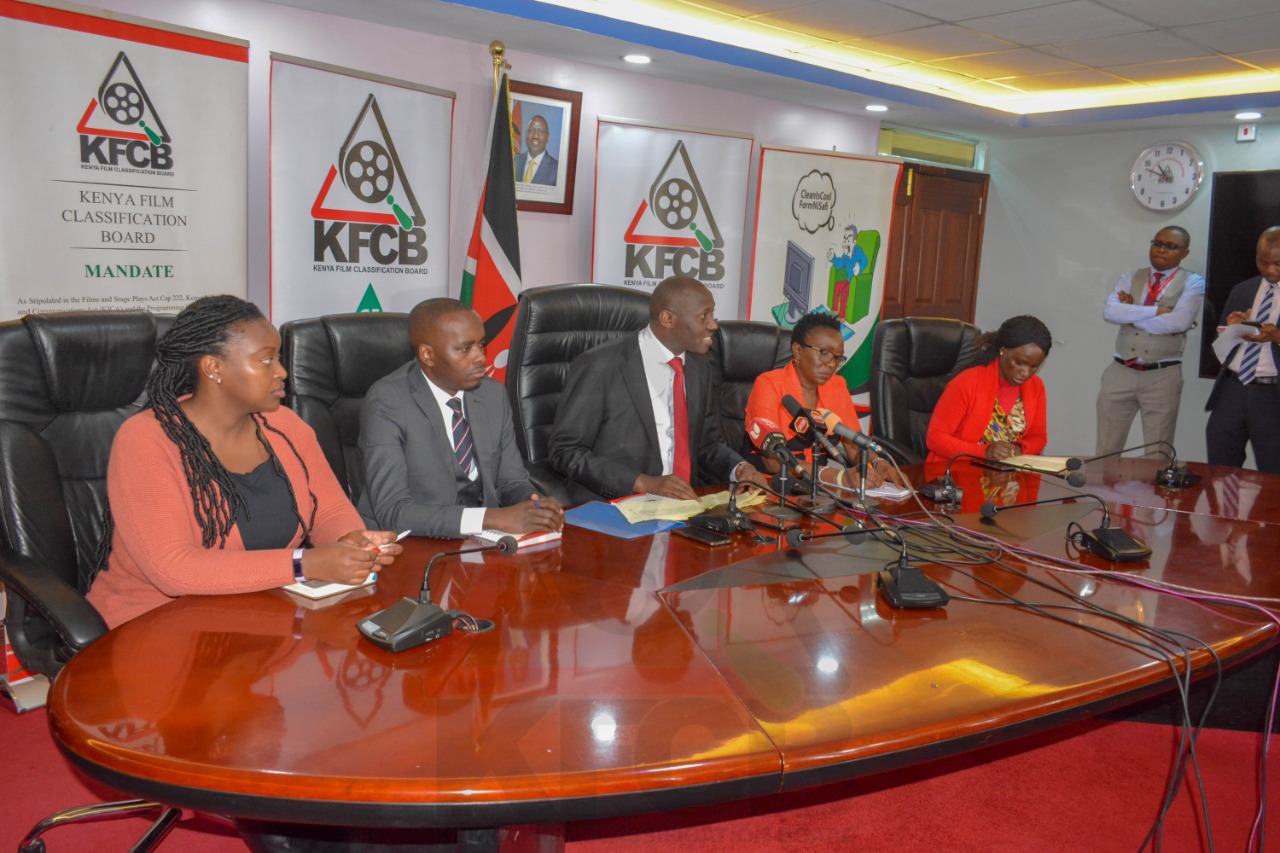 Co-regulation framework
On a different note, Wambua noted that the Board had earlier in the year subjected the proposed co-regulation framework to public consultation. Under the proposed Framework, he said that the Board had recommended the involvement of the industry namely; broadcasters, Video on Demand (VOD) and Over the Top (OTT) content service providers in the classification of films meant for distribution on their respective platforms.

“As initially conceptualized, broadcasters, VoD and OTT platforms would examine 70% of the content meant for broadcast, distribution and exhibition on their respective platforms. On its part, the Board would only be examining and rating the remaining 30% of the content over and above monitoring and enforcing compliance. Industry players and other stakeholders, however, indicated to the Board that broadcasters, VOD and OTT audiovisual content providers should be allowed to classify 100% of content meant for broadcast and distribution on their respective platforms,” the Board’s Chief Executed said.

Wambua observed that the Board in consultation with the relevant Government ministries and state agencies is in the final stages of developing a self-classification framework. Once completed, the framework shall be subjected to public consultation together with the revised Film Classification Guidelines. The overarching objective of the self-classification framework is to enhance compliance with film sector laws and to align regulation with technological trends and market realities.

He added that the self-classification framework is also meant to promote the ‘ease of doing business for broadcasters, Video on Demand and Over the Top to our youth in the local creative economy, re-affirming that the Board does not intend to regulate user-generated content as this would amount to violating the constitutionally-guaranteed freedom of expression. The Ag CEO, however, called on those distributing user-generated audio-visual content particularly on social media platforms to exercise responsibility and to institute the requisite safeguards to protect children from exposure to adult content. 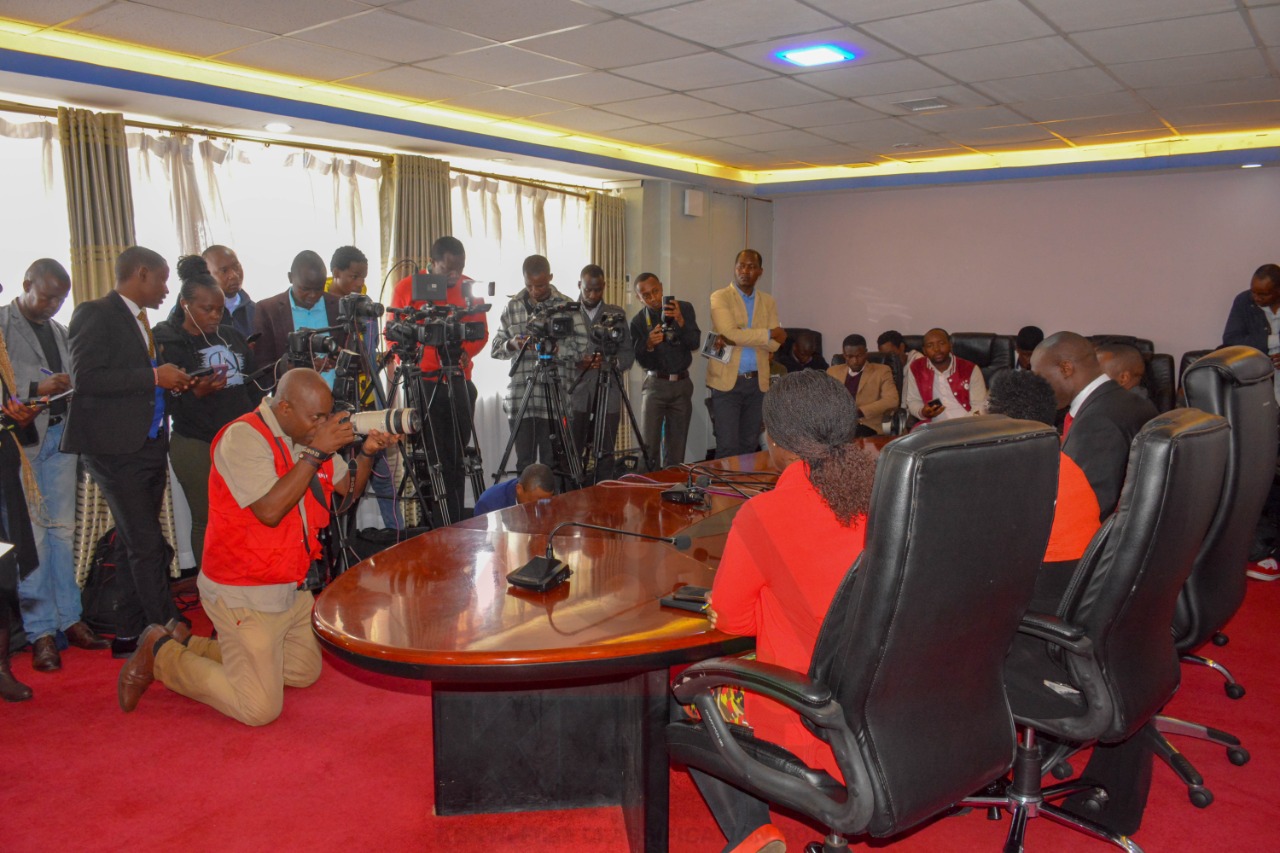 Closure of schools for long holidays
Meanwhile, the Board’s CEO has urged parents, caregivers and guardians to be more vigilant and monitor the content their children will be accessing and consuming on various media platforms and guide them appropriately as schools close for the December holidays.

“Children will be home for close to seven weeks. We, therefore, call on parents, caregivers and guardians to be more vigilant and monitor the audio-visual content their children will be consuming on various platforms and guide them appropriately. Protecting children from exposure to inappropriate film and broadcast content is our collective responsibility,” he reiterated.

He advised parents to make use of the wide parental controls offered on various ICT devices and Video on Demand platforms as well as take a keen interest in the gaming activities and content that their children are exposed to especially on the internet and home gaming consoles or machines.

Gaming
“Where minors ask to be bought games, parents need to pay due attention to ensure purchase games that are age-appropriate for their children. Where online multi-player games are involved, it is important to guide children to focus on the game and be careful not to interact with strangers through the in-game chat rooms. In-game chatrooms are increasingly becoming avenues for paedophiles to groom or solicit minors. For minors, it is recommended that parents de-activated the in-game chat functionalities to avoid undue interactions with strangers,” he further advised.

Wambua confirmed that the Board recognizes the need for parents to be equipped with the necessary skills and knowledge on how to parent effectively in the digital age, handle tech-savvy children and stay informed on emerging risks, noting that the Board in collaboration with relevant partners will soon roll out a Parental Digital Literacy Program (PaDiL).

“The programme that targets parents and caregivers also aims at promoting responsible digital parenting and viewing practices among consumers of online content, especially children. Further, it is aimed at empowering parents with skills on how to monitor and guide children on content access through various digital platforms as well as enhance parents' awareness on emerging technologies,” he stated. 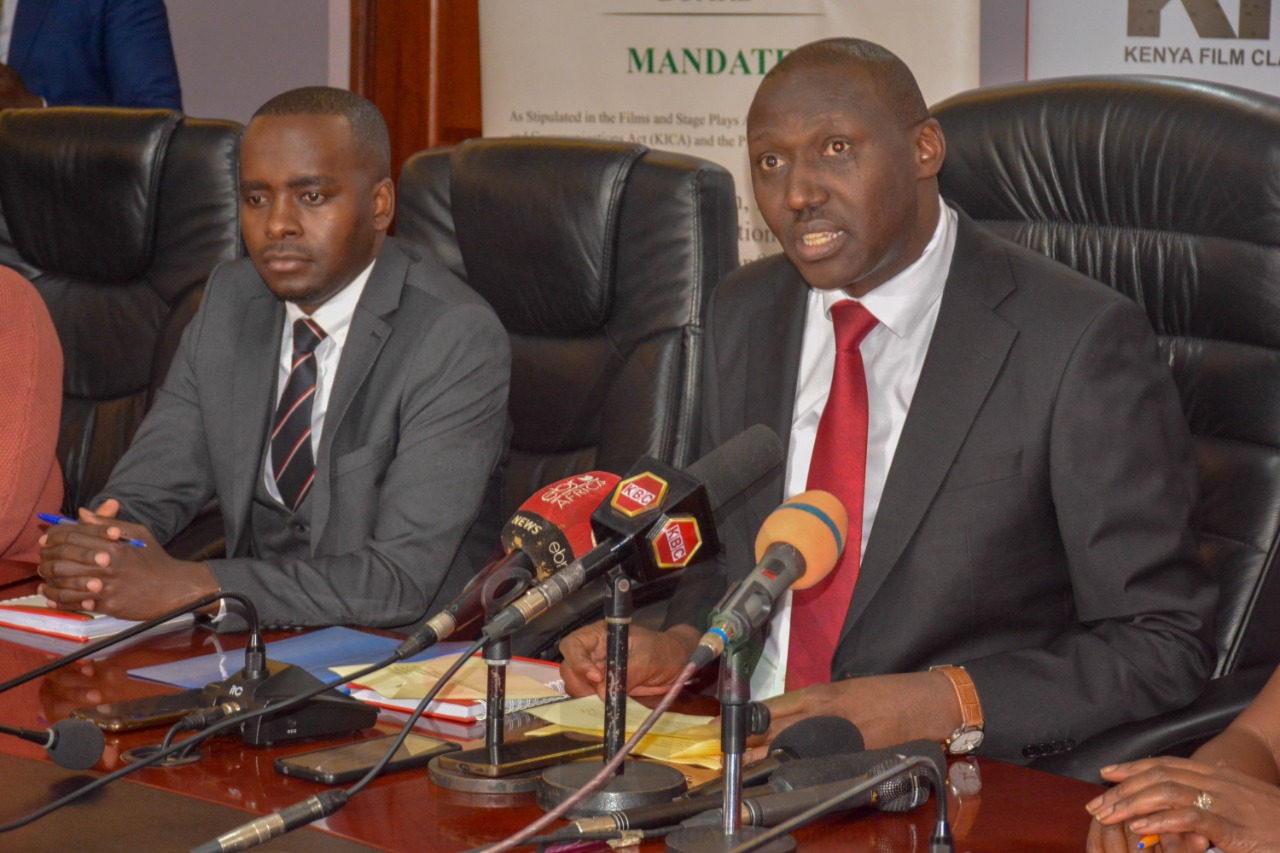 PSVs clean content campaign and awards
To heighten measures on child protection from exposure to harmful content, the Ag CEO said that the Board in partnership with Public Service Vehicle (PSVs) operators, PSVs Saccos, among others is spearheading the second phase of the KFCB FormNiSafi PSVs Clean Awards that seeks to encourage public vehicles to exhibit appropriate content to ensure that children who use Public Service Vehicles are not exposed to adult material.

The campaign, that is running for eight consecutive weeks through the KFCB social media platforms, entails members of the public voting for PSV drivers and conductors exhibiting clean content in their vehicles. The wining PSV crew in the campaign are being awarded a token of Ksh10,000 and other awards from other partners including PSV Saccos.

Unscrupulous Video dens
On the same breath, the CEO indicated that the Board through its regional officers in collaboration with other agencies will heighten monitoring and inspection to ensure that underage children are not admitted into video dens that are common during the holidays.

He appealed to film exhibitors and distributors to operate their businesses in line with the terms and conditions outlined in their respective licenses and the Films and Stage Plays Act Cap 222.

“We call upon members of the public and others stakeholders to support our programmes particularly those geared towards protecting children from exposure to inappropriate audio-visual content,” the Board’s Ag CEO concluded.